022 – The Life of a Swami: Living a Joy-filled Life – An interview with Swami Nirvanananda 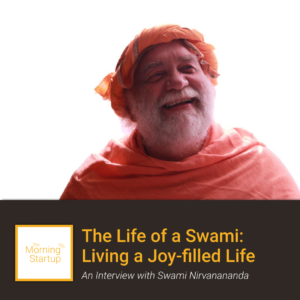 Join Mindtation’s Morning Startup for an interview and music with Swami Nirvanananda Saraswati (which means the bliss of freedom from suffering) as he shares his fascinating path of service, joy, love and music.

As a young boy, he was drawn to music and a spiritual path. Once he read the Autobiography of a Yogi he knew that he had found his “home.” He set off for India and began his life of service by working with Mother Teresa. In 1992, he was sworn in as a swami. He connected with Father Marian Zelazek in Puri and has since dedicated his life to supporting the charities and schools established by Father Marian.

Additionally, Swami has created several additional charities for young girls and the Shantipuri Friends Foundation. He travels the world singing his music – sharing his joy and love. He is an accomplished musician and Kirtan artist; he has recorded over 70 albums/CD’s.

Watch or Listen
Listen to this podcast on your favorite app, or watch it on YouTube here.

Subscribe to our newsletter and receive knowledge and tips on steps to live your life awake with a full heart and clear mind.

Something went wrong. Please check your entries and try again.